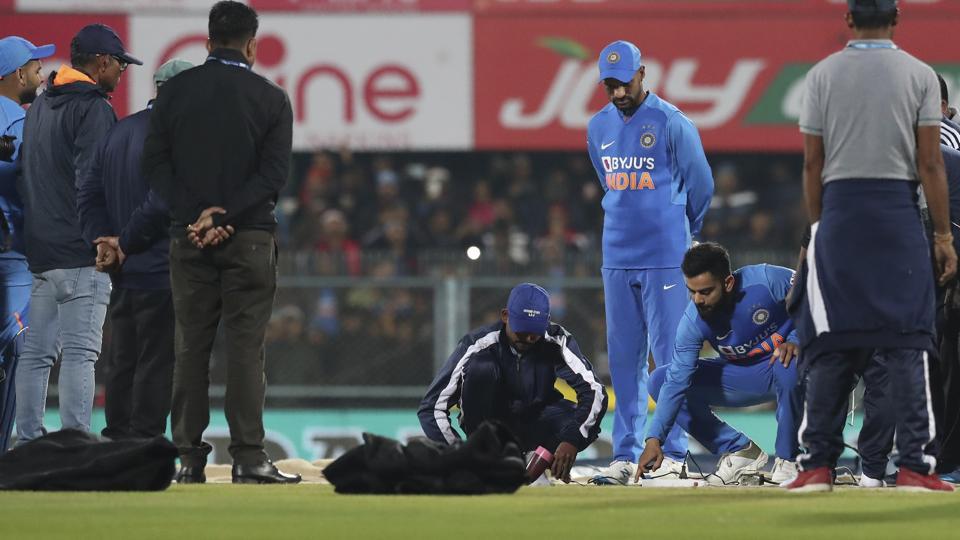 the crowd cheered, the Indian captain opted to field first and the two skippers went back in. It started raining and for the rest of the night, frequent showers and damp patches on the field and on the pitch ensured that the crowd had to go back home without seeing any action. As per reports, rain water seeped through the leaking covers that were used to cover the pitch at the Barsapara Stadium.

The showers lasted less than an hour, but only the bowlers’ run-ups and the square were protected by the covers and hence, the rest of the outfield had borne the brunt of the rain. Once the showers relented, ground staff worked for almost two hours on the field. Super soppers ran up and down and even steam irons and hairdryers were used to dry the pitch. The umpires strolled on and off frequently, but despite all this, the match was abandoned shortly before 10pm.

ALSO READ: ‘Don’t believe I’m fighting for the same spot (in Team India) with anyone’

Former India opener-turned Aakash Chopra said on-air that it was disappointing to see such kind of preparation for an international game and even pointed out that leaking covers were used to protect the pitch from rain.

“The outfield is bone-dry so I’d say it’s a schoolboy error that the water has seeped onto the pitch. Perhaps there are a few holes in the covers. It’s really disappointing preparation for an international game,” Aakash Chopra told Star Sports.

The image of a hair dryer being used to dry the pitch amused people on social media and they even targeted the organisers for not being prepared to host an international match.